5 Books to Celebrate Our 5th Birthday

As we celebrate our fifth anniversary at Aaron’s Books and our growth from a modest used bookstore in 2005 to our role today as the area’s independent bookstore, I wanted to look for five books I discovered in these five years that I love sharing with our wonderful customers.

The Dust of 100 Dogs
by A.S. King
My experience with this incredible novel demonstrates exactly why I love owning a bookstore. We received this debut novel from a small press, with incredible cover art and intriguing jacket copy. And once I was done with the first chapter, I simply would not stop reading until I was finished. This multi-layered story alternates between characters in different time periods, and is interspersed with quick thoughts about dog care. Trust me, it works. It is marketed as a teen novel, probably because the two main characters are teenage girls, but really this is a book for everyone who enjoys discovering work of a master storyteller. One of my great joys at the store is identifying the customers I KNOW will love this book.

Shadowbridge
by Gregory Frost
In the fantasy genre, the author has the freedom to create any type of world, with any rules they want. The challenge is to convince the reader that it is a world worth exploring. Shadowbridge offers the experience every brave fantasy reader craves. I immediately trusted the author, and I enjoyed every step of this journey even though I had no idea where it was going. I loved reading the mythological stories native to this world as much as I enjoyed the characters’ journey. In a strange way, I would compare Shadowbridge to Watership Down, but that doesn’t do justice to Frost’s complete mastery of this world that I want to visit again and again. 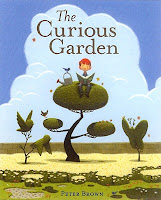 The Curious Garden
by Peter Brown
Before having a kid of my own, I never paid much attention to picture books. The artwork was just background noise to the text. Even with Ferdinand or Make Way for Ducklings, stories I read countless times as a child, the pictures were never stars on equal billing with the words. But now I know better. I understand how the right picture can add the depth and character that make a good book into a great one. In The Curious Garden, it is a perfect marriage of story and art. The boy lives in a terribly dirty city and finds a little patch of wildflowers. He lovingly nurtures them until there is an abundance of green that inspires neighbors and strangers throughout the city to add their own growth to the landscape. This book is a delight for kids from two to 92 who want to see more green and growing things in the world.

Diamond Ruby
by Joseph Wallace
An historical novel about survival, family, Brooklyn, Coney Island, and baseball. Ruby is a character I will never forget. She is so determined to make a better life for her young nieces that you know nothing is going to stop her. Not bootleggers, the Klan, or Kenesaw Mountain Landis. This book is for readers young and old, baseball fans, "girl power" enthusiasts, book clubs, history buffs, and anyone who loves a good story. 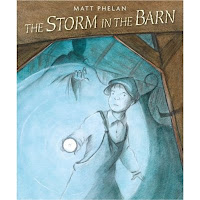 The Storm in the Barn
by Matt Phelan
This graphic novel for children tells an unusual fairy tale set during the Dust Bowl in Oklahoma. Part history, part fantasy, the story would be one of my favorites, even before you add panel after panel of beautiful artwork. The characters have wonderful, worn, tired faces, even the children, and everything is tinged brown like the dust that was all around them. It is just perfect.
As you can imagine, I had a terrible time cutting the list to five. In fact, my next set of five would be:

Lamentation
by Ken Scholes
It has many of the elements of a traditional fantasy novel, and then it blends in unexpected ingredients, such as mechanical men, to make a totally new adventure. I loved the characters, the pace, and the conflict, along with the fact that it holds as a stand-alone story even though it is clearly the first in a series.

School of Essential Ingredients
by Erica Bauermeister
This book is the opposite of anything I would have read before opening Aaron's Books because there is little plot or action. Rather, it is a beautiful, sweet look at the lives of a group of strangers who gather for a cooking class. Don't read it while you are hungry.

Frankie Pickle – Closet of Doom
by Eric Wight
The main character has an incredibly active imagination, and everything that’s happening inside his head is depicted in comic book form. When Frankie’s real life is described, it is done in a chapter book. So clever, and there are more Frankie adventures to come.

The Magicians
by Lev Grossman
This is an adult fairy tale set in a world much like our own, but where those with hidden magical talent are sent to a college version of Hogwarts and there is always the looming possibility that a door will open to another world very much like Narnia.

The Selected Works of T.S. Spivet
by Reif Larsen
This book makes my list -- despite a mess of an ending -- because the first half is as charming and unusual a novel as I can imagine, with graphs and other scientific drawings that provide unexpected and clever insight into the main character.

*
And even expanding the list to 10, I had to leave off many more. The Graveyard Book, The Girl with the Dragon Tattoo, The Lion and the Mouse, and Harry Potter and the Deathly Hallows are among the glaring omissions, but so much has been said about these genius works already that my comments would feel redundant.

NOTE: Please Ignore Vera Dietz by A.S. King did not make my list only because it is not published until October 2010. So it is the first entry on my list for the next five years.