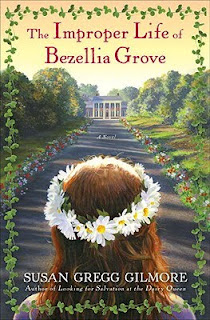 Nobody in Nashville has a bigger name to live up to than Bezellia Grove. As a Grove, she belongs to one of city’s most prominent families and is expected to embrace her position in high society. That means speaking fluent French, dancing at cotillions with boys from other important families, and mastering the art of the perfect smile. Also looming large is her given name Bezellia, which has been passed down for generations to the first daughter born to the eldest Grove. The others in the long line of Bezellias shortened the ancestral name to Bee, Zee or Zell. But Bezellia refuses all nicknames and dreams that one day she, too, will be remembered for her original namesake’s courage and passion. Though she leads a life of privilege, being a Grove is far from easy. Her mother hides her drinking but her alcoholism is hardly a secret. Her father, who spends long hours at work, is distant and inaccessible. For as long as she can remember, she’s been raised by Maizelle, the nanny, and Nathaniel, the handyman. To Bezellia, Maizelle and Nathaniel are cherished family members. To her parents, they will never be more than servants. Relationships are complicated in 1960s Nashville, where society remains neatly ordered by class, status and skin color. Black servants aren’t supposed to eat at the same table as their white employers. Black boys aren’t supposed to make conversation with white girls. And they certainly aren’t supposed to fall in love. When Bezellia has a clandestine affair with Nathaniel’s son, Samuel, their romance is met with anger and fear from both families. In a time and place where rebelling against the rules carries a steep price, Bezellia Grove must decide which of her names will be the one that defines her.

Susan Gregg Gilmore knocks the pound cake out of the park (to mix my southern lit and sport metaphores) with her latest novel, The Improper Life of Bezellia Grove.

Continuing to write about the South of the mid-20th century, Susan captures life in Nashville "society" in the 60's and early 70's. Bezellia would be from the other side of the tracks, per se, from Catherine Grace, the heroine in Susan's first delightful novel (Looking For Salvation At The Dairy Queen), but they have much in common. Bezellia, like Catherine Grace, has no mother (so to speak) to look after her and relies on others in her house to guide her through life. In this case, it is her housekeeper and handyman. In the course of growing up and maturing, Bezellia meets and falls in love with her handyman's son, a young African-American names Sam. They both know their relationship is wrong by each of their societies' standards, but embark on something much deeper than a summer crush. However, Bezellia's home life, what little of it we could call a life, takes her time and energy away from Sam and toward another. While there are inklings of a love triangle, this book is so much more than a romance. It is also more than a commentary on the status of mixed relationships in the south in the 60's, it is more than a story of the haves and have nots of Nashville. At the heart of the story is a strong young lady who finds what she needs in the people that surround her and not her family (much like Catherine Grace).

I think that is why I enjoyed this book so much. It had the underlyings of all these big issues (I can't mention them all here so as not to spoil the story, but a popular theraputic techinique comes into play, too), but it was not a preachy story on race or the South's hierarchical society ... it's story about an ordinary girl. I fell in love with Bezellia the girl, Bezellia the legend, and Bezellia the story; and I hope you do too.

Note: Susan will join us for a traditional tea on Wednesday, August 25th at 4pm to talk about her writing. The event is free but reservations are requested.

Posted by Aaron's Books in Lititz at 8:00 AM