Here are some great new Children's and YA books that are new to our shelves
The Cat In The Hat Knows A Lot About That series books are here!

PBS KIDS and Random House join to support science learning for preschoolers nationwide with the premiere of THE CAT IN THE HAT KNOWS A LOT ABOUT THAT! on Monday, September 6.  Voiced by award-winning actor Martin Short, Dr. Seuss’s The Cat in the Hat guides friends Sally and Nick – with a little help from the Fish, Thing 1 and Thing 2 – on fun-filled adventures.   Filled with adventure and silliness, THE CAT IN THE HAT KNOWS A LOT ABOUT THAT!, based on the acclaimed The Cat in the Hat’s Learning Library book series, will appeal to preschoolers’ natural curiosity and engage them in the process of scientific exploration and discovery.  A team of science and early childhood experts developed the curriculum for the first season’s 40 episodes, each of which begins with a question posed by Sally or Nick. Guided by the Cat, the kids figure things out by observing, collecting and managing clues, making connections, constructing and evaluating theories, and having discussions -- all in a preschool-appropriate manner.  The newly re-issued books available include "If I Ran the Rain Forest", "On Beyond Bugs",  "There's No Place Like Space",  and "Clam-I-Am".

A great new title based on one of Aaron's (and Sam's!) favorite PBS series-The Electric Company Mad Libs
No one that grew up in the 70's or early 80's needs to be told about the awesomeness of these two things.... can you imagine how cool the two are TOGETHER??!!!??


For the fans of Katie Kazoo  and the boys who aren't we present
George Brown, Class Clown! 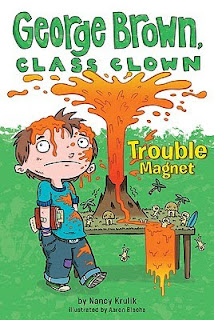 Super Burp (#1) The first day at a new school is always the hardest, right? No, not always as George finds out the hard way. On the second day at . . . Sugarman Elementary School, he is suddenly seized by uncontrollable burps, burps so loud they practically break the sound barrier, burps that make him do wild and crazy stuff and land him in trouble with a capital T. One thing is for sure: these are not normal burps, they are magic burps - and they must be stopped! But how?

(Trouble Magnet, #2) The annual talent show at Shirley S. Sugarman Elementary School is in just a few weeks, and George signs up to be a stagehand. He is determined to do a good job because the new, improved George is responsible and helpful and glad to pitch in. So is comic mayhem coming? Oh yeah, absolutely! But leave it to Nancy Krulik to devise an unexpected way for disaster to strike and bring down the curtain. 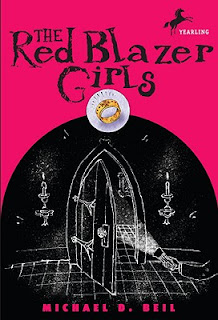 For those that love Nancy Drew, Harriet the Spy (and math!)
The Red Blazer Girls, The Ring of Rocamadour  (now out in paperback)
Selected by Indie Booksellers for the Summer 2009 Kids' List
“Sophie and her friends must use cunning, luck, and an awful lot of math to figure out the puzzles that will lead them to the next clue in a decades-old scavenger hunt and enable them to find a priceless artifact -- before anyone else does, of course. This is, I hope, the start of many adventures with The Red Blazer Girls.” -- Melissa Posten, Children's Book World, Haverford, PA

It all began with The Scream. And ended with . . . well, if we told you that, it wouldn’t be a mystery! But in between The Scream and The Very Surprising Ending, three friends find themselves on a scavenger hunt set up for a girl they never met, in search of a legendary ring reputed to grant wishes. Are these sleuths in school uniforms modern-day equivalents of Nancy, Harriet, or Scooby? Not really, they’re just three nice girls who decide to help out a weird lady, and end up hiding under tables, tackling word puzzles and geometry equations, and searching rather moldy storage rooms for “the stuff that dreams are made of” (that’s from an old detective movie). Oh, and there’s A Boy, who complicates things. As boys often do. 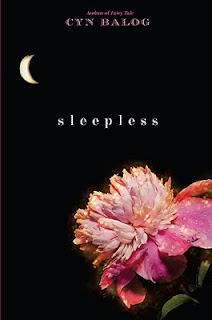 Eron DeMarchelle isn't supposed to feel this connection. He is a Sandman, a supernatural being whose purpose is to seduce his human charges to sleep. Though he can communicate with his charges in their dreams, he isn't encouraged to do so. After all, becoming too involved in one human's life could prevent him from helping others get their needed rest.  But he can't deny that he feels something for Julia, a lonely girl with fiery red hair and sad dreams.  Eron's time as a Sandman is coming to a close, and his replacement doesn't seem to care about his charges. Worse, Julia is facing dangers she doesn't recognize, and Eron, as he transitions back to being human, may be the only one who can save her. . . .Even once they've become human again, Sandmen are forbidden to communicate with their charges. But Eron knows he won't be able to forget Julia. Will he risk everything for a chance to be with the girl he loves?  Cyn Balog's follow-up to Fairy Tale has more wit, more supernatural delights, and more star-crossed romance! Teen girls will love this story of a Sandman who falls in love with his human charge.

Happy Reading!
Posted by Aaron's Books in Lititz at 2:23 PM