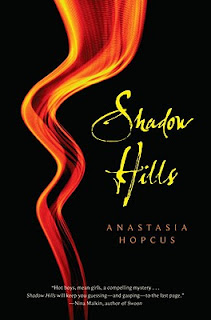 Persephone – Phe (Fee) – Archer lost her sister in a mysterious accident. Now the weird nightmares Athena had been having are haunting Phe. In order to figure out what the dreams mean, Phe enrolls in the Devenish Prep school in Massachusetts, a world away from her Los Angeles home. There she discovers even more mysteries – like the graveyard from her dreams. And people who have extra abilities that are somehow tied to a plague that hit the town in the early 1700s.

With the help of her boyfriend, Zach, one of the “odd” townies, Phe discovers the real truths behind odd deaths and events going on in the town of Shadow Hills. Zach broke a cardinal rule and told her about himself and others in the town. About why metal things move when he's around. And how he can recharge electronics with just a touch. But that knowledge is something that Phe isn't supposed to have. And she knows that since coming here, something has happened to her. Changed her. But she's not sure in what way. How it all ties to Phe is something she needs to figure out, but finding out could mean her death.

This is a well-crafted story with believable characters and an intriguing plot. It contains all the elements of a good mystery, paranormal abilities (without a vampire or werewolf in sight!) and teen angst all rolled into one book. Though a bit slow at times, the overall story is very good and keeps you turning pages until the end. And there was just enough of a carrot left dangling at the end to make me believe this might turn into a series. But even if it doesn't, the ending is satisfying. If you're tired of vampires and werewolves, but still want a good paranormal story, pick this one up. You won't be disappointed.

Happy Reading!
Posted by Aaron's Books in Lititz at 7:22 AM