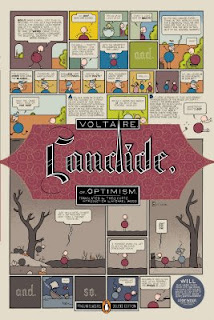 Candide By Francois Voltaire; Theo Cuffe (Translator); Michael Wood (Introduction by); Chris Ware (Illustrator) A 2005 Penguin Classics translation, with the most awesome graphic novelesque summary on the front cover.
The Unconsoled By Kazuo Ishiguro, UK paperback editionThe Unconsoled is at once a gripping psychological mystery, a wicked satire of the cult of art, and a poignant character study of a man whose public life has accelerated beyond his control. The setting is a nameless Central European city where Ryder, a renowned pianist, has come to give the most important performance of his life. Instead, he finds himself diverted on a series of cryptic and infuriating errands that nevertheless provide him with vital clues to his own past. In The Unconsoled Ishiguro creates a work that is itself a virtuoso performance, strange, haunting, and resonant with humanity and wit."A work of great interest and originality.... Ishiguro has mapped out an aesthetic territory that is all his own...frankly fantastic [and] fiercer and funnier than before."--The New Yorker

The Autobiography of Alice B. Toklas By Gertrude Stein
"Largely to amuse herself, [ Gertrude Stein ] wrote The Autobiography of Alice B. Toklas in 1932...using as a sounding board her companion Miss Toklas, who had been with her for twenty-five years. It has been said that the writing takes on very much Miss Toklas' conversational style, and while this is true the style is still a variant of Miss Stein's conversation style. ...She usually insisted that writing is an entirely different thing from talking, and it is part of the miracle of this little scheme of objectification that she could by way of imitating Miss Toklas put in writing something of her own beautiful conversation. So that, aside from making a real present of her past, she created a figure of herself, established an identity a twin, a Doppelganger.... The book is full of the most lucid and shapely anecdotes, told in a purer and more closely fitting prose... than even Gide or Hemingway have ever commanded .... "
-- Donald Sutherland

The Hegel Reader By Stephen Houlgate (Editor)
The Hegel Reader is the most comprehensive collection of Hegel's writings currently available in English.  Stephen Houlgate is Professor of Philosophy at the University of Warwick. He is the author of Hegel, Nietzsche and the Criticism of Metaphysics (1986) and Freedom, Truth and History: An Introduction to Hegel's Philosophy (1991), and is the editor of Hegel and the Philosophy of Nature (1997).


Happy Reading!
Posted by Aaron's Books in Lititz at 10:47 AM