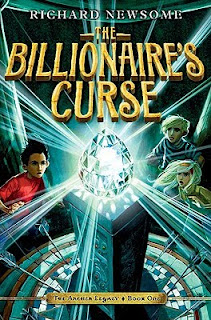 Take one twelve-year-old kid from Australia, one dead aunt in London - who also happens to be a billionaire - add a missing diamond, disinterested parents, and a butler reminiscent of Lurch from the Addam's Family, and you get an adventure full of twists and turns, murder and mayhem.

Gerald Wilkins has never met his great aunt Geraldine, but some reason, she leaves him her entire estate when she dies. Gerald's mother is ecstatic and immediately takes off on "vacation", dumping Gerald with his aunt's stodgy lawyer and Mr. Fry, a dour butler/chauffeur who is not happy with his "gift" of silverware.

Geraldine also leaves a cryptic note telling Gerald she was murdered and it is up to him to find out who killed her. Gerald and two of his friends go off on an adventure that includes kidnapping, murder and a hint at a paranormal ability that Gerald doesn't know he has.

While the book is entertaining, the heavy British vocabulary may put off some readers. Plus it is very obviously the first book in a series as many of the prominent threads are left dangling. Plus there are the issues of child abandonment since Gerald's parents take off as soon after the reading of the will as possible, not even returning when he is seriously injured.

As stated above, this is an entertaining book, but one to pick up with caution, bearing the above in mind.

~Vicky Burkholder
Posted by Aaron's Books in Lititz at 8:56 PM