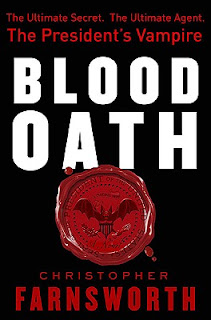 Zach Barrows is an ambitious young White House staffer whose career takes an unexpected turn when he's partnered with Nathaniel Cade, a secret agent sworn to protect the president. But Cade is no ordinary civil servant. Bound by a special blood oath, Cade has spent more than 140 years in service to the president, battling nightmares before they can break into the daylight world of the American dream.
Immediately Zach and Cade receive their first joint assignment: one that uncovers a shadowy government conspiracy and a plot to attack the Unites States with a gruesome new biological weapon. Zach soon learns that the world is far stranger, and far more dangerous, than he ever imagined . . . and that his partner is the least of his problems.

If you like Stephen King, you're going to love this book. Nathaniel Cade is a secret agent sworn to protect the president. And he just happens to be a vampire. He's been around for 143 years and been through more liaisons than he can count. Zach Barrows is young, ambitious, and has ideas where his political career should be going - and it's not in the company of the undead. But he and Cade form an uneasy alliance as they battle against forces that would take down the president and the U.S.


You can look at this book as a sort of Dracula meets Jack Ryan (Tom Clancy books). It is very well written - a thrill a page. There are dirty politics, intrigue, action, vampires, zombies and gore - lots of gore in the end. The end stacks up a lot of body parts, but that's part of the genre. If you're a tad on the squeamish side, I suggest you don't read this while eating. Or before bed. Or... okay, if you'r squeamish, skip the end completely. But if you enjoy thrillers and horror, you will love this book.

Posted by Aaron's Books in Lititz at 5:07 AM