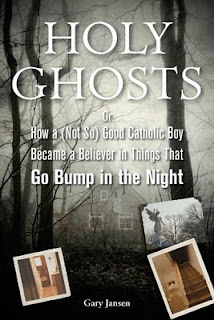 "Holy Ghosts" is a true story about one man's journey to find a link between his religion and the paranormal. It is also a ghost story - a real ghost story.

Gary Jansen, a respected editor and writer, is not given to flights of fancy, but the events of his life would strain even the most skeptical of us. Growing up in Long Island, his mother often claimed their home was haunted. He wasn't sure he believed her, but strange things did seem to happen in the house. When he moved back into his family home in 2001, he had to accept that the odd occurrences were real. By 2007, he knew he had to do something. His son refused to go into his room, and both Gary and his wife had experienced strange incidents in house.

Through friends, he contacted Mary Ann Winkowski, the inspiration for TVs "The Ghost Whisperer." With her help, he rid his home of the two very real ghosts living there.

This is a wry, sometimes funny, sometimes frightening look at the paranormal and how it relates to the Catholic religion. It is a ghost story, but it is also a a deeply religious memoir of Gary trying to understand the place of spirits and the afterlife in respect to his faith.

This is a relatively short, quickly read, excellently written book for anyone searching for the link between life, death, religion, and what happens next. Recommended for anyone with an interest in religion and/or ghosts.

~Vicky
Posted by Aaron's Books in Lititz at 8:48 PM