New On Our Shelves- 2nd Week of August

We've got lots of great non-fiction and YA books coming in the door each day.  The New York Times recently ran an essay on adults readng YA books...we LOVE YA here, and read them constantly!

Plus By Veronica Chambers
The perfect romantic makeover story about an every-girl whose dream comes true . . .Beatrice Wilson is our lovable Cinderella, who just got dumped by her very first boyfriend and put on twenty-five pounds. But then she's discovered as a plus model. In the eyes of pop culture, Bee is Jessica Alba and then some! Now she must vanquish skinny rivals, fend off sleazy photogs, and banish jealous frenemies in her rise to superstardom. All the while, she's torn between her first love and the surprisingly sincere up-and-coming rapper she tutors in calculus. But what's better than finding your prince charming? Finally learning to love yourself!

Linger By Maggie Stiefvater
(okay, we've had this one for a while, just haven't featured it yet!)
In Stiefvater's "Shiver," Grace and Sam find each other. Now, in "Linger," they must fight to be together. At turns harrowing and euphoric, "Linger" is a spellbinding love story that explores both sides of love--the light and the dark, the warm and the cold--in a way readers will never forget. 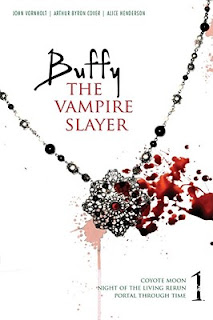 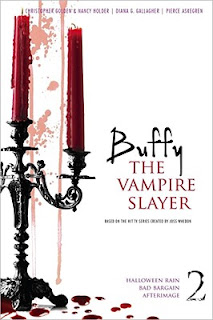 In Coyote Moon, a typical night at the carnival becomes deadly as shape shifters turn the amusement park into their own house of horrors.

Buffy starts having past-life nightmares in Night of the Living Rerun, and must face her historic counterpart before the events of the past repeat in the present.

In Portal through Time, Slayers over the centuries are in danger, and Buffy must protect them in order to save her own life and legacy.

In Halloween Rain, as if Halloween at the Hellmouth isn’t bad enough, a brewing storm threatens to bring new demons to life, just in time for a celebratory massacre.


A curse on the school’s rummage sale causes strange behavior in the halls of Sunnydale High in Bad Bargain.

Buffy and her friends are looking forward to the revival of the old drive-in theater, but when people start slipping into comas in Afterimage, this late show may be their last….

The Murder Room By Michael Capuzzo
(STAFF PICK!)
Thrilling, true tales from the Vidocq Society, a team of the world's finest forensic investigators whose monthly gourmet lunches lead to justice in ice-cold murders. Three of the greatest detectives in the world--a renowned FBI agent turned private eye, a sculptor and lothario who speaks to the dead, and an eccentric profiler known as "the living Sherlock Holmes"-were heartsick over the growing tide of unsolved murders. Good friends and sometime rivals William Fleisher, Frank Bender, and Richard Walter decided one day over lunch that something had to be done, and pledged themselves to a grand quest for justice. The three men invited the greatest collection of forensic investigators ever assembled, drawn from five continents, to the Downtown Club in Philadelphia to begin an audacious quest: to bring the coldest killers in the world to an accounting. Named for the first modern detective, the Parisian eugène François Vidocq-the flamboyant Napoleonic real-life sleuth who inspired Sherlock Holmes-the Vidocq Society meets monthly in its secretive chambers to solve a cold murder over a gourmet lunch.

The Real Wizard of Oz: The Life and Times of L. Frank Baum
By Rebecca Loncraine

The Real Wizard of Oz is an imaginatively written work that stretches the genre of biography and enriches our understanding of modern fairytales. L. Frank Baum, author of The Wonderful Wizard of Oz and its thirteen sequels, lived during eventful times in American history-- from 1856 to 1919-- that influenced nearly every aspect of his writing, from the Civil War to Hollywood, which was emerging as a modern Emerald City full of broken dreams and humbug wizards, to the gulf between America's prairie heartland, with its wild tornadoes, and its cities teeming with "Tin Man" factory workers. This is a colorful portrait of one man's vivid and eccentric imagination and the world that shaped it. Baum's famous fairytale is filled with the pain of the economic uncertainties of the Gilded Age and with a yearning for real change, ideas which many contemporary Americans will recognize. The Wizard of Oz continues to fascinate and influence us because it explores universal themes of longing for a better world, homesickness and finding inner strength amid the storms. 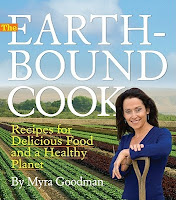 The Earthbound Cook; Recipes for Delicious Food and a Healthy Planet
By Myra Goodman
A cookbook with a conscience, from an author who knows the world of responsible eating as well as anyone. Is cage-free the same as free-range? Is grass-fed worth the price? What's better: farmed salmon or wild? Organic salad that's been shipped across the country, or local salad grown with pesticides? To nuke leftovers in the microwave or crank up the oven? Myra Goodman-co-owner of Earthbound Farm, the country's largest producer of organic produce and other products, inspiration behind the Earthbound Farmstand Cafe, and author of" Food to Live By"-now brings both sides of the dinner dilemma together by showing us what to shop for, and how to cook it.
Posted by Aaron's Books in Lititz at 7:47 PM