61 Hours  By Lee Child
Jack Reacher is back.

The countdown has begun. Get ready for the most exciting 61 hours of your life. #1 New York Times bestselling author Lee Child’s latest thriller is a ticking time bomb of suspense that builds electric tension on every page.

Sixty-one hours. Not a minute to spare. 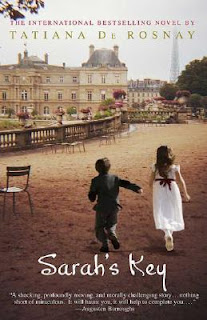 Sarah's Key By Tatiana de Rosnay
Selected by Indie Booksellers for the October 2008 Indie Next List
“Sarah's Key is told from both the perspective of an 10-year-old girl whose family is rounded up during the Vel D'Hiv in France in 1942 and an American who presently lives in Paris. The heartbreak is real, the love is true, and the need to find out how their two lives are connected made this one of my absolute favorites!” -- Sarah Galvin, The Bookstore Plus, Lake Placid, NY

Selected by Indie Booksellers for the Spring/Summer '09 Reading Group List
“Sarah's Key is the story of Sarah, a 12-year-old girl swept up by the police in the Vel D'Hiv roundup in occupied France, and of journalist Julia Jarmond, who is writing about the event 60 years later. This hauntingly powerful story will remain with you long after the last page is turned.” -- Linda Walonen, Bay Books, San Ramon, CA

Selected by Indie Booksellers for the Fall '09/Winter '10 Reading Group List
“This emotionally intense story of a young girl who is caught up in a roundup of Jewish families in Paris during World War II is a powerful selection for reading groups.” -- Sandy Palmer, Wy'east Book Shoppe & Art Gallery, Welches, OR

Gettysburg;  An Alternate History By Peter G. Tsouras
What if Robert E. Lee’s brilliant young cavalry commander Jeb Stewart had arrived earlier than the second day of battle? What if Pickett’s Charge had been swifter and stronger? What if the Army of the Potomac was commanded by the daring Winfield Hancock instead of the more cautious George Meade? Gettysburg fuses a chaotic clash of arms with a keen vision of how wars are fought and won–or lost. Most of all, this is a monumental, blow-by-blow reimagining of one of history’s most famous battles–the men who shaped it, the events it triggered, and the way it might have been.

Witch & Wizard By James Patterson; Gabrielle Charbonnet
The world is changing: the government has seized control of every aspect of society, and now, kids are disappearing. For 15-year-old Wisty and her older brother Whit, life turns upside down when they are torn from their parents one night and slammed into a secret prison for no reason they can comprehend. The New Order, as it is known, is clearly trying to suppress Life, Liberty, and the Pursuit of Being a Normal Teenager. But while trapped in this totalitarian nightmare, Wisty and Whit discover they have incredible powers they'd never dreamed of. Can this newly minted witch and wizard master their skills in time to save themselves, their parents--and maybe the world?

Posted by Aaron's Books in Lititz at 6:36 AM